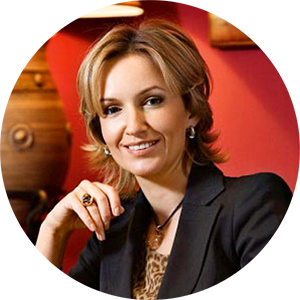 Gergana Passy was a key player during the EU accession talks of Bulgaria and later on when Bulgaria joined the EU she became the first European Minister of Bulgaria (2007-2009). Deputy Minister of Foreign Affairs in two governments (2004-2007) and elected MP in two parliaments (2001-2004, 2005). President of the oldest PanEuropean movement in United Europe – PanEuropa Bulgaria.

Gergana Passy is the Digital Champion of Bulgaria (since 2012). Founding President of the Digital National Alliance (branch of Grand Coalition for Digital Skills and Jobs). She is a strong proponent of the digital future of Europe and Bulgaria, incl. through a wider involvement of girls and women in ICT and transforming of education.

Lawyer. Mother of two daughters and one son. Married to Dr Solomon Passy (Minister for Foreign Affairs 2001-2004, President of the Atlantic Club).