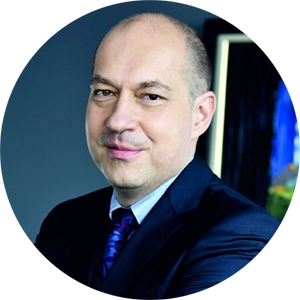 Member of the Country Team of KBC Group for Bulgaria, Member of the Management Board of UBB, Executive Director Legacy and subsidiaries

Teodor Marinov has been part of United Bulgarian Bank’s management since June 2010, when he was elected member of the Board of Directors, while holding the position of Executive Manager Corporate Banking of the Bank since September the same year.

After the acquisition of United Bulgarian Bank by the Belgian finance group KBC Group in June 2017, Teodor Marinov has become member of the KBC Country Team in Bulgaria, member of the Management board and Executive Director Legacy of UBB. During the period 2001-2010, he was Executive Director of Interlease EAD and since 2006 has been also involved in the management bodies of the leasing companies of the group of the National Bank of Greece in Romania and Serbia.

His professional development began in 1994 as a Financial Analyst at the Sofia Stock Exchange. In 1995-1997 he worked as a Customer Relationship Manager and Credit Analysis Unit Manager at the Bulgarian Investment Bank AD. From 1997 until 2000 he was Investments Manager in the Balkan Regional Division of the National Bank of Greece. TeodorMarinov holds Master’s degrees in Business Administration from London Business School and in Systems Control from the Technical University, Sofia. He has been a holder of CFA (Certified Financial Analyst) professional designation since 2001. Marinov also completed the INSEAD Inter-Alpha Banking Programme in 2002.

He is fluent in English and Russian.