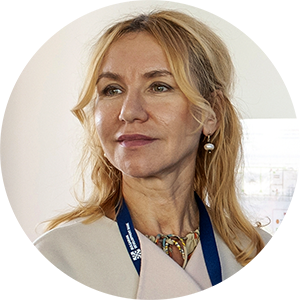 Head of strategic and sustainable development at the BDB

She has over 25 years of experience in top management roles in banking and finance, government, business consultancy in the Black Sea region and CEE economies. Currently she is heading the strategic and sustainable development at the BDB focusing on sustainability strategy, practical application of sustainable finance principles to bank lending.

Sophia held successive roles as a vice-minister of economy and vice-minister of transport in the 2001-2005 government of Bulgaria, led by Simeon Saxe-CoburgGotha when she negotiated with the WB, the IMF, the EC and other IFIs roadmaps for reform and financing for these reforms and donor investments. She also negotiated state aid, competitiveness and transport subjects of Bulgaria’s EU accession.

From 2006 till 2010 Sophia was the CFO of the Black Sea Trade and Development Bank (BSTDB). In the past she held various roles in commercial banking, the Bulgarian National Bank and worked in the CEE coverage team of CSFB.

She holds a PG diploma in financial strategy from Oxford University Said Business School, a MSc in Banking from Reading University, a MA in Economics from the Central European University and a master’s diploma from the University of National and World Economy in Sofia. She was awarded Soros Foundation and British Chevening Scholarships.

She is fluent in English, Greek, Russian and uses Check language.