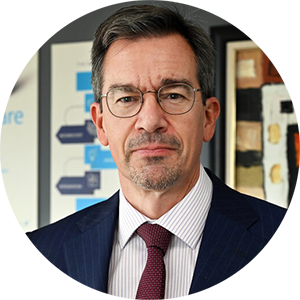 Chairman of the Management Board and Chief Executive Officer of UBB

Peter Roebben started his career in 1992 as an account officer Corporate Banking for Kredietbank (now KBC) in London. From 1994 untill 1998 he was Director of the Iberia Representative Office in Madrid. After one year in Brussels as account manager for the group’s Multinationals Division, he became General Manager Corporate Banking in the Paris branch in 1999. From 2005 untill 2010 he was Executive Director Corporate Banking at CSOB Bank in the Czech Republic.

Between 2010 and 2017 he served as Senior Managing Director and member of the Executive Committee of K&H Bank & Insurance Hungary. Later in 2017 he becomes Senior General Manager Group Credit Risk at KBC Group’s Head Office in Brussels. In 2019, Peter Roebben was appointed Chief Executive Officer of KBC Bank in Ireland, which he held until his current appointment as Country Manager of KBC Group in Bulgaria, Chairman of the Management Board and Chief Executive Officer of UBB.

Peter Roebben has graduated from the University of Leuven, Belgium with a master degree in law. Later he has obtained an MBA from Vlerick Business School, Belgium.

He is fluent in Dutch, French, English, Spanish and German.