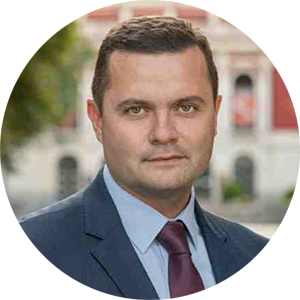 Pencho Milkov was born in 1978. He graduated from the Faculty of Law at the University of Ruse. Since 2013 he has been a doctor of law. He has worked as a lawyer in civil, commercial and administrative law. From 2011 to 2017 he was a local councilor in the Municipality Assembly – Ruse. He has a diploma from the Institute of Social Policy, and in 2017 he received a master’s degree in national security and defense at the “G. S. Rakovski” Military Academy in Sofia. In the parliamentary elections of the same year, Pencho Milkov was elected MP from Ruse in the 44th National Assembly. He was a member of the standing committees on legal affairs and on internal security and public order. Co-sponsor of 25 bills and one of the most active MPs in number of speeches, positions and questions to ministers. On November 3, 2019 he was elected mayor of Ruse Municipality.