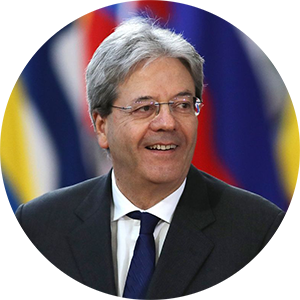 As a European Commissioner for Economy (2019-2024) Paolo Gentiloni is working to ensure the implementation of the Sustainable Development Goals in the context of the European Semester cycle of economic governance. His team works to ensure further deepening the Economic and Monetary Union and applying the Stability and Growth Pact, using the full flexibility allowed in the rules to support investment while safeguarding fiscal responsibility. He is also leading the work on the design of a European Unemployment Benefit Scheme; coordinating the launch of the InvestEU programme and setting up and implementing the Sustainable Europe Investment Plan; leading international efforts to find an agreed approach on the taxation of the digital economy and pursuing efforts to make a common consolidated corporate tax base a reality in the EU. In the framework of the European Green Deal he is leading the review of the Energy Taxation Directive and preparing the proposal for a Carbon Border Tax.

Paolo Gentiloni, born 22 November 1954, is an Italian politician who has served as European Commissioner for Economy in the von der Leyen Commission since 1 December 2019. He previously served as Prime Minister of Italy from December 2016 to June 2018. After a lengthy career in local politics, Gentiloni was elected to the Chamber of Deputies in 2001. He served in the Cabinet under Romano Prodi as Minister of Communications from 2006 to 2008. Gentiloni is former professional journalist.