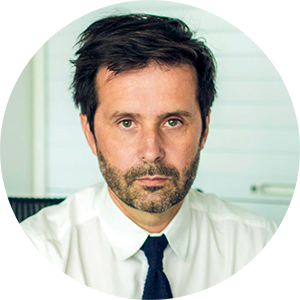 Yves Le Stunff is General Manager of TotalEnergies EP Bulgaria and TotalEnergies EP Greece. In Bulgaria, he is responsible for the oil and gas exploration project in Block 1-21 Han Asparuh in the deep offshore part of the Black Sea.

He has been working for TotalEnergies since 1996. First as a geoscientist, he has held various positions both in Operations and in Research & Development. He has been involved in several Exploration and Field Development projects in countries such as Argentina, Libya, Indonesia, Vietnam and Malaysia. From 2012 to 2015, he has been in charge of Prospective and Strategy for the Research and Development division. Between 2015 and 2020 as a Chief Digital Officer of the Exploration & Production branch, he developed major projects and collaborations in the field of Artificial Intelligence and other digital technologies. He has been as well a leading contributor of the creation of TotalEnergies Digital Factory in Paris.

He is a graduate in Physics from the Ecole Normale Supérieure of Paris (France) and holds a PhD in Geophysics from the University of California at Berkeley.