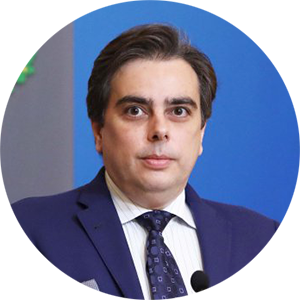 Deputy Prime Minister for EU Funds and Minister of Finance

Assen Vassilev graduated in Economics from Harvard and specialized in Business Administration and Law at Harvard Business School and Harvard Law School, respectively.

From 1999 to 2004, Assen Vassilev worked as a consultant at Monitor Group in the USA, Canada, Europe and South Africa. He managed marketing and strategic development projects for large international companies in the sectors of telecommunications, energy, mining, insurance, as well as for a number of large producers of consumer goods.

From March 2013 to 29 May 2013, he was Minister of Economy, Energy and Tourism in the Caretaker Government of Marin Raykov.

He held the position of Minister of Finance from 11 May 2021 to 15 September 2021 during the first cabinet of Stefan Yanev.

Elected by the 47th National Assembly of Bulgaria as Deputy Prime Minister for EU Funds and Minister of Finance on December 13, 2021.